Make no mistake about it: The stock market crashed last Monday.

And it was terrifying.

Stocks bounced on Wednesday and Thursday, with the Dow Jones Industrial Average gaining back more than 1,000 points.

Now investors want to know: Was last Monday’s doubling over a below-the-belt hit?

Was the rally back Wednesday and Thursday an “all clear” signal?

Was Friday’s action indicative of anything?

Here’s the truth about last week, what’s going to happen next and what you should do…

After Monday’s and Tuesday’s frightening downdrafts, many investors are panicking.

While he has a plan for his readers to stay calm and make a comeback, Shah had words of warning during his latest Varney & Co. appearance… “Enjoy this rally while it lasts.”

Despite the recent rally, Shah told Fox Business viewers that we’re not out of the woods yet. Find out how fragile he thinks the market is – and what you need to do to protect yourself.

It’s no surprise that U.S. stocks have dropped into a free-fall mode.

I’ve been warning about the risks that stock, bond and other financial-asset prices face for some time.

Now that it’s happening, though, you need to understand these two things.

In fact, while other investors are panicking – and see gloom and doom – I see opportunity.

“It’s time to protect ourselves,” Shah warned Varney & Co. viewers today. With no support or good news for the stock market on the horizon, Shah believes it might be time to batten down the hatches.

On his latest sit-down with Stuart Varney on FOX Business, Shah issues a chilling prediction about the global market that you’re not going to want to miss.

To find out how much the market stands to lose, just watch the video below.

Peer-to-peer lending, or P2P as it’s known, is a juggernaut financial-services Disruptor.

But thanks to its supercharged growth, P2P lending has attracted the attention of regulators and other financial-market overseers. They’re scrutinizing this new form of lending from multiple angles – fearing it may be too disruptive for its own good.

The U.S. Treasury Department, the Consumer Financial Protection Bureau, financial services regulators, bank and finance company lobbyists and, most recently, the U.S. Court of Appeals for the Second Circuit are weighing in on P2P lending.

There’s a lot at stake here…

There’s even more at stake for the stock market and the economic health of the country.

The issues aren’t complicated, but tackling them will be.

As we’ve said before, P2P lending is one of the biggest new developments in the world of finance.

But you don’t want to take a wrong step.

“The economy is in a slump, and things aren’t getting any better,” Shah warned on his latest appearance on FOX Business show Making Money With Charles Payne.

With the markets looking weak and tired, Shah predicts an imminent correction and answers the question on everyone’s mind: Is now a good time to invest?

To find out how to play the impending market crash – and how triggers like China, a Fed interest hike and gold are a part of it all – watch the video below.

In a market stuffed with price-shifting financial “Disruptors,” the proliferation of “activist investors” is a front-and-center catalyst we’re going to follow and cash in on.

We’re addressing activist investors today because one of the biggest noisemaking players in the biz is back in the news with his latest move.

I’m talking about Bill Ackman, the billionaire hedge fund manager who runs Pershing Square Capital Management LP. With $20 billion in assets under management, Pershing Square is an activist investor in publicly traded companies. And it was a top-performing fund last year.

Unlike most spin-offs – which, as a group, tend to be market-beaters – Mondelez has frustrated analysts and investors by underperforming. Although the stock has accelerated a bit of late, the fact is that since the 2012 breakup, Mondelez shares are up only 20% – versus 50% for the Standard & Poor’s 500.

Companies like this are prime targets for activists like Ackman, former corporate raider Carl Icahn, Nelson Peltz or the late Kirk Kerkorian.

Investors of this ilk take big stakes in moribund or cash-rich companies and lean on management to make changes – pushing the “C-suite” execs to slash costs, boost buybacks or launch or raise dividends.

That makes it a Disruptor that’s capable of generating meaningful wealth.

But you have to pick the “right” activist stock.

As I’ll show you today… 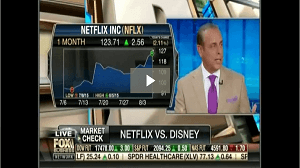 Shah says the “new economy” is here – and you can already see the space growing between the winners and losers.

Walt Disney Co. (NYSE: DIS), Tesla Motors Inc. (Nasdaq: TSLA) and Fitbit Inc. (NYSE: FIT) are taking it on the chin. And Netflix Inc. (Nasdaq: NFLX), Uber and Airbnb are on the rise.

In other words, a new order is in town.

During his latest sit-down with Making Money host Charles Payne, Shah reveals which companies are crumbling and which are crucial for your nest egg. To see Shah’s latest appearance on Fox Business, just watch the video below.

Back in early 1982, I was a clerk for a big market maker on the floor of the Chicago Board of Options Exchange (CBOE). A year later, I had a seat on the exchange, was a market maker and was running a hedge fund.

My first day of trading – for my account – was a disaster.

There was a “fast market” in FedEx Corp. (NYSE: FDX), which means the pit was crowded with traders yelling and screaming, buying and selling options based on an unexpectedly positive earnings report that had just come out. I rushed into the crowd and amassed a position.

I walked back to my booth on the floor, right next to the Salomon Brothers booth, where Norman – the investment bank’s head trader, and without a doubt the smartest guy on the floor – asked what I’d done. I told him I got “long” a bunch of calls.

Of course, I hadn’t given that a second’s thought. I was too excited about getting into the position.

Just a few minutes later, a news story said the earlier earnings report was wrong – and that FedEx had actually lost money that quarter.

It took me a week to make that money back, but that’s how I “earned” the first of five trading rules that are the key to getting rich.

These aren’t made-up rules. I earned and learned them from experiences just like this one.

The find out which stocks are “Buys” and which ones are “Avoids,” watch the video below.