There’s a reason why the first few installments of my Teaching You How to Fish the Markets series have been about banks.

You need to know the truth about banks.

Why? Because they rob you.

Why? Because they can.

It’s the Willie Sutton bank robber quote in reverse. Willie was asked, “Why do you rob banks?”

He famously answered, while in handcuffs, “Because that’s where the money is.”

But, banks can’t keep robbing the public if they keep shooting themselves in their feet. That’s where central banks come in. They are the real kingpins keeping their robber minions in pinstripes – instead of prison stripes.

Estimates now are that U.S. banks – the too big to fail ones – will end up paying more than $100 billion in fines, settlement costs, to buy back bad mortgages, to right some of the past wrongs related to the mortgage crisis they caused.

It could end up being more. But they’re all still in business. They’re able to digest these “costs of doing business,” and get bigger. And the banks are making enough profits to want to “reward shareholders” by raising their dividend payouts and buying back their stock.

Then there’s the LIBOR mess. Banks colluded to manipulate the London Interbank Offered Rate. LIBOR is referred to by the British Bankers’ Association (an outfit populated by bankers as a kind of trade group that oversees LIBOR dissemination), as “the world’s most important number.”

There have been some settlements already. Three giant European banks – Royal Bank of Scotland, UBS, and Barclays – have ponied up almost $3 billion to settle matters regarding their involvement.

How much will the big American banks have to pay to settle their end of the scheming manipulation? 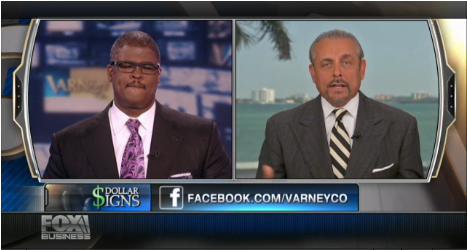 Chapter Four ended as a cartel of powerful bankers gathered on Jekyll Island to develop a plan for creating a central banking system which would work for their interests.

John Pierpont Morgan was no stranger to how central banks worked. He had witnessed their power firsthand.

Junius S. Morgan, Pierpont’s father, became a partner at George Peabody and Company in 1854 and moved to London – where the American-born Peabody had been bankrolled by Baron Nathan Mayer Rothschild. At the time, the rich and powerful Rothschilds exerted extraordinary control over the Bank of England.

George Peabody and Company rode the mania for railroad shares, whose prices in 1857 were benefiting from the Crimean War’s impact on rising grain prices, which Western railroads transported in huge quantities.

But the good times didn’t last.

It’s time for some insight.

I’m constantly asked where I think the market is going next. Since the Dow recently reached new highs and since the S&P 500 is near (about half a percent away, as of yesterday’s close) its old October 2007 highs, it’s no wonder that’s the question on everyone’s mind and tongue.

My answer is: I don’t know where it’s going.

But I do know what to do about it.

The market is like the lottery, you’ve got to be in it to win it. And that includes being out of it at times, too.

That’s how professional traders think. Everything you do puts you in a position. Being in cash is a position every bit as much as being fully invested is having a position.

What’s important – and what all successful traders do – is to watch your position.

If you’re in stocks, what is your exit strategy on the profit side? On the loss side?

How are your stocks performing relative to firm-specific issues or the market’s general trend?

Equally important–as in always, always–is when and where to apply that cash?

With that in mind, here’s what I’m looking at as we hit record after record – and what I recommend doing about it.

Let’s talk about Cyprus, the International Monetary Fund, and the European Central Bank.

Let’s call what the IMF and ECB are doing what it really is. After all, it is the ultimate institutional goal. It’s thieving.

So let’s start with the thieves…

Because all the banks that lent to the Cypriot banks to keep them in business are now about to get shafted.

There’s a few missing seats in their musical chairs merry-go-round, so they are enforcing their right to get bailed out.

How will the banks do it?

Chapter Three ended with the rise of J.P. Morgan and how he used chronic boom and bust cycles to his own great advantage. That brings us to the Panic of 1907.

The Panic of 1907 was a seminal event in the history of banking. It spawned the Federal Reserve System – but not immediately. There would be a long cloak-and-dagger affair before the Federal Reserve Act was signed into law – while Americans were distracted – two days before Christmas, on December 23, 1913.

How Congress was duped by many of its own, and how the public was blindsided into believing their government was creating a safer banking system is a testament to the power of private banks to run and, for their own profit, ruin America.

Here’s how it all happened.

Last week, Attorney General Eric Holder scored some “I’m not really a hack” points when he testified before the Senate Judiciary Committee that he was afraid criminal prosecution of too-big-to-fail banks and bankers could wreck the economy… and the world.

Who knows? Maybe he got charged an overdraft fee or saw his credit card interest charges had gone to 21%. Shouldn’t have been 10 minutes late with that payment, Eric!

But what are the odds?

Some people will do anything to make money in the market.

Believe it or not, folks have even resorted to manipulating stocks to fatten their wallets.

And, crazy as this sounds, there are more people doing it than anyone imagined.

Now, I know you’d never do that. But the SEC isn’t so sure. Neither is the FBI.

According to yesterday’s Financial Times (the pink paper that some financial types read), the FBI is joining forces with the SEC in order to “tackle the potential threat of market manipulation… that [has] taken markets beyond the scope of traditional policing.”

What’s hilarious to me is that, before the FBI goes looking for market manipulators (like you) along with the SEC, it should be looking at the SEC!

Those are the words President Obama used to describe what would result from sequestration.

Please, don’t make me laugh. The sequester will not only not ruin America, it will in fact start the process of fixing what Congress can’t – no, make that won’t – fix.