Let’s talk today about the cheap cost of buying favorable legislation in the House, and about how bills are titled to deceive us, even when there’s no good reason to lie to our faces.

But first, I have to give a giant shout-out to Kevin Wack, the Capitol Hill reporter for the American Banker, which I read every day, and you should, too.

Kevin just made front and center something that I hadn’t seen nor heard about and can’t find anywhere else in print. But, it’s right up our alley here. So, give Kevin all the credit for this little tale.

Summer unofficially kicks off this weekend, at least here in the U.S., as we celebrate Memorial Day.

Before we even get to the “official” beginning of summer on June 21, sweat will be pouring from every banker’s brow on June 17.

That’s the day Greeks go back to the polls to basically determine whether or not they want to remain in the euro currency bloc.

The game of chicken is on.

Germany has basically said to Greece, we aren’t going to ease up on the austerity requirements imposed on you so you could get more money from all of us, so, if you think that by electing a left-wing group of groupies who are campaigning on easing your burdens by leaning on us, your fed-up creditors, go lean on Atlantis instead, cause that’s where you’ll end up… underwater, and lost.

The Greek politicians – at least the lefties throwing curveballs – think there’s no way the Germans will let them exit the currency zone, and of course don’t want them to exit the European Union. They are saying to the population, elect us, we’ll spit on their boots and they’ll bend over to shine them themselves. And, in the end, we the people will prevail.

Facebook stock got off to a rocky start when it IPOed last Friday, with Nasdaq messing up order confirms and Morgan Stanley propping up the share price. On day two, the stock price had slumped more than 10% in morning trading. That’s when Shah joined Fox Business’ Stuart Varney to discuss why the stock price is falling – and could keep going. 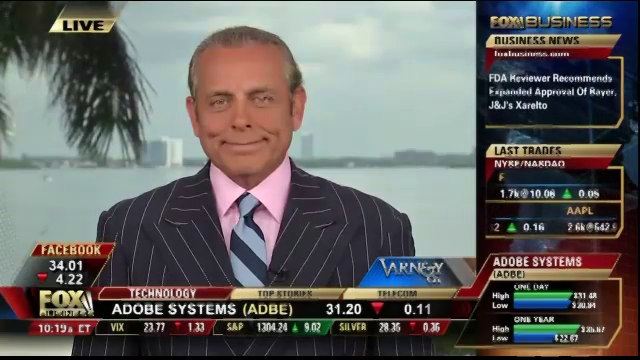 The day before yesterday I had a chance encounter with a very beautiful young lady.

I approached her. (I’m interminably shy, so approaching anyone is something I’ve only done maybe a few times in my life, really. Hmmm, maybe that’s why I haven’t dated anyone since last September. Don’t laugh at me, it’s not that funny… to me.) And I chatted her and her friend up for a little while.

She accepted my invitation for dinner, so we went out on a date last night.

As I said, she’s beautiful. Now, don’t get me wrong, it’s not that I’m only interested in outer beauty (but, frankly, given a choice…); I’m even more interested in inner beauty.

But inner beauty is harder to measure.

So, we’re at dinner at Caffe Abbracci – the best Italian restaurant in Coral Gables, Florida, it’s legendary – and while everyone at every table is staring at her (and I’m trying not to stare), I’m talking to her and looking for signs of inner beauty.

I’ll get back to how the date went.

Fast-forward to this morning, and the markets.

If you don’t have the stomach for what’s going to feel like an out-of-control rollercoaster ride, sideline yourself.

If, on the other hand, you like a lot of action, welcome to Mayhem – the preamble month to what will likely be the Summer of Some Discontent.

That is, unless you like rapid-fire trading. Which, by the way, is not just fun, but can be very, very profitable. I’m in, and so are the subscribers to my Capital Wave Forecast. We’re gearing up for some heavy betting in the weeks and months ahead.

So, what’s front and center today? You know.

Yesterday, Saturday morning, I was strolling by JPMorgan Chase’s Park Avenue office building in Manhattan. It was 11:40 am, and I was returning from a long walk from my midtown hotel down to Chelsea (it was definitely “a Chelsea morning” in NYC… thank you Joni Mitchell).

I hadn’t planned to walk by their office building; I didn’t even know where it was. But there I was, rounding 48th Street on Park Avenue, when I saw the JPM sign. I thought, how ironic, I’m in New York, appearing on FOX News yesterday talking about the debacle at JPM, and here I am serendipitously walking by their office building.

But it gets even better.

There was no one on the street, which is pretty unusual for New York. I was looking at the barricades in front of the building and imagining that they must have needed them on Friday, when the press and public must have been surrounding the building on news that the bank had just admitted losing $2 billion (actually it’s $2.3 billion and counting) on a hedge position.

I was thinking, poor CEO Jamie Dimon. And how ironic; he’s been publically deriding the Volcker Rule as being stupid and unnecessary, and now he’s the tempest in the teapot (which is what he called rumors about his London office’s rumored losses)…

When who else should get out of a shiny GMC chauffeured “black car” but Jamie Dimon. <

I know, you’re sick of hearing about Europe’s problems.

But the problem with Europe is that it won’t go away. And if it does go away, we’ll have even bigger problems. What a mess.

Of course, I’m talking about the Euro-currency zone and the European Union, not Europe itself.

So, whose bright idea was it to gloss over (with shiny promises and, later, a shiny new currency) thousands of years of differences and shove all Europeans into a funnel in the hopes that they’d all come out the other end as one homogeneous mass of humanity?

I bet you can guess…

The volume is off so I can concentrate on writing this.

Which is a good thing, because right now actor Robert Wagner is mouthing the advantages of “reverse mortgages” to older folks who may not be able to make ends meet.

In this commercial, which many of you have probably seen, he’s advocating taking a reverse mortgage out on your houses, because, after all, you’re going to die, you know, and some bank would love to have a lien on your house when you go quietly in the night.

That reminds me, I’ve got to look into the guts of how reverse mortgages really work out for the folks who, somehow, I feel, are being preyed upon, and the lenders who, of course, are the saviors of the world and deserve a little lien before you die on them.

Gee, I wonder if they’re (the banks) arbitraging or hedging their reverse mortgage portfolios with viaticals? You know, viaticals: the selling of life insurance policies where a third party becomes the new owner of the policy, pays the premiums and collects the full benefits of the policy when the insured dies peacefully, or is murdered by the viatical holder… something about not wanting to pay those premiums for very long.

Anyway, there’s a stat-arb play in there somewhere and I’m going to find it, run some regression analysis on it, back-test it, and trade it with the Goldman Sachs guys on their death-to-Muppets trading desk.

I was saying… I’m watching the Bloomberg headlines flash.

It seems my Subprime Student Slaves article really struck a nerve! Nearly 250 of you subscribers wrote in to me in response to that one. Thank you.

As I said, I’m going to compile your comments, stories, and ideas in my letter to Congress and the President. And since I think what you had to say really adds to the discussion, I want to start off today’s Q&A session by sharing some of those with everyone.

(As always, you can share your own comments and questions with me by posting them to the bottom of any article, or emailing them to customerservice@wallstreetinsightsandindictments.com.)

Q: The obvious solution for the debt enslavement part is to change the law to allow discharge in bankruptcy. Let the racketeers eat the loss. ~ Tom S.

A: Thankfully, there is a movement towards allowing the discharge of student loans in bankruptcy. And that’s going to help. The fact that this hasn’t been allowed before is a testament to the power of the moneylenders in America.

B: Sounds like an entitlement guru talking. We are talking LOANS here. Inherent in the concept of a loan is that it must be paid back. Do you understand that students are provided a contract when they borrow money for school? Perhaps if they did their due diligence about a field they seek employment in and READ the student loan contract prior to spending the money, they may understand these loans are not free money, cannot be forgiven, and the degree pursued may not result in employment. What ever happened to the notion of personal responsibility? ~ M.P.

A: M.P., you’re not wrong. But there are other forces exerting outside influence on the inner intentions of a lot of “students” susceptible to being sold a bill of goods. Sometimes we’re stupid for being conned, and sometimes the con is just so cleverly concealed.

Q: There is this misconception that college is for everyone. Truth is, not everyone has the capacity or desire to work through a college degree… Trade school at a community college would be more appropriate and more than adequate to meet the higher education needs of many college students, with the added benefit of leading to reasonable paying jobs. ~ Don (a tenured professor with 23 years in the system)

A: Don, thank you for lending your credibility as an educator to this discussion and for stating what a lot of your peers would likely not have the guts or honesty to say.