We’re about to find out if my “gut” has been right, or if the pivot point I’ve been talking about is really a springboard for stocks to go a lot higher.

The roughly 4.3% drop in stocks only a few short weeks ago, and their subsequent bounce back, set up a pivot point halfway back to the highs of late March and early April.

So far the pivot point is looking like a staging ground for a rocket launch, as we’ve kept moving higher, seemingly with little resistance.

At least that’s what it looks like to most people, especially analysts and market pundits.

There’s just no knocking earnings this quarter (so, of course, that means I’m going to).

For the most part, they’ve been great.

Of the reporting companies so far, something like 77% have beaten analysts’ earnings estimates.

The fact that consensus expectations had mostly been lowered prior to reporting time hasn’t hurt the perception that things are better than, well, better than the analysts had expected.

Which really bothers me…

On yesterday’s “After the Bell” on FOX, Shah was one of several market analysts asked to comment on the precipitous drop in Netflix Inc. (NasdaqGS:NFLX) after the company reported second-quarter earnings. Watch it now to see why Shah thinks the Netflix business model may be unsustainable. 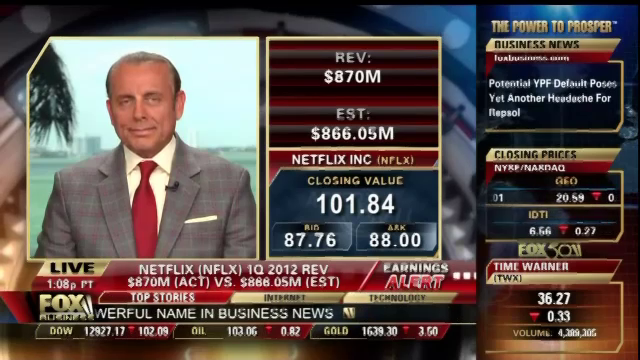 We’re getting closer. To what, I’m not sure.

But we’re getting there.

Call it a crossroads. On the charts I look at, that crossroads looks like a pivot point.

The charts I follow and draw all kinds of lines across – and I’m talking about a lot of different charts that cover a lot of markets – are very, very similar in terms of exhibiting formations that show them coming to a point where we’re going to see either see breakouts or breakdowns.

Probably within a few weeks, but it could be any moment.

It’s fascinating, and it’s also scary. I’ve never seen so many different markets, asset classes, and instruments so correlated in terms of all heading to their own crossroads at very close to the same time.

Let me put it this way…

There are always two ways (at least two ways) to look at everything, including the market. In fact, whether one looks at the market from near or far makes a big difference in what you see.

Like most complex equations with multiple inputs, synthesizing the different inputs is critical to what comes out on the other end of your equation. In this case, I’m talking specifically about two inputs – the perspective from near and from far away. And I am talking about how they affect one’s view of what’s happening in the market and where it’s likely going to go next.

Yesterday was a good example.

Early in the morning (in my travels), I saw that the Dow futures were up 82, and I thought, it could be a good day and we might finally tip the scales resting on the pivot point fulcrum we’ve been teetering on for a couple of weeks now.

As the morning rolled on, before the open, company after company reported earnings, and they all handily beat consensus estimates – some by huge margins. From a distance, if that’s all you saw, you’d be inclined to think, as I did, that the market was headed for a great day.

But that was just the far view…

“The strong to seem to get more/While the weak ones slave/Empty pockets don’t ever make the grade/Mama may have, and Papa may have/But God bless the child that’s got his own/ That’s got his own.”

We can thank the late, great Billie Holiday for those lyrics. And we can thank our higher education system for giving “the child that don’t his own”a chance to get some.

Some debt, that is.

Students, many of them adults looking to gain new skills, are being systematically ripped off and enslaved by schools and lenders, blinding them with hope about what a higher education can do for them while bilking them for billions in the process.

It’s a dirty game, and a big one at that. You probably know, because you probably owe.

First, let me offer some insights on the market before I get to my indictments…

Most people seem to have a hard time understanding why the markets do what they do.

The only reason I don’t is that I’ve been trading professionally for 30 years.

Not that I “got it” when I started out. I didn’t. I had to learn. And I learned much of what I know the hard way. I made a lot of mistakes. I studied my mistakes, I still do, just as much as I study what moves markets and what I get right.

I’m always learning. That’s because everything changes. You have to always take in new data, mesh it with recent data, layer it over the past, and not ever think you know for sure what’s going to happen.

So, how do you do it? How do you understand what’s going on with different markets?

I’m giving the folks who work hard to get Wall Street Insights & Indictments out, twice a week, to the tens of thousands of you who read it, a happy holiday weekend.

So, there won’t be a WSII in your email inbox this Sunday morning.

One thing’s for sure…

Thanks for all the bright comments and questions you’ve contributed lately.

You can share your own comments and questions with me by post them to the bottom of any article, or emailing them to customerservice@wallstreetinsightsandindictments.com.

Okay, who’s up first this time?

Q [Re: The Case for Spitting into the Wind]: Is it just maybe possible that the Fed is pumping liquidity into the markets to make everyone feel that things are so much better, so they will pile in and keep the markets rising? Hmmm… ~ Steve G.